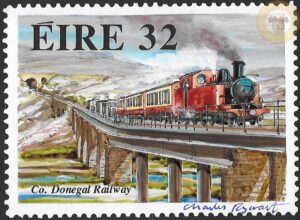 When Niall McCaughan, Manager of Donegal Railway Heritage Centre first started work in the museum at the end of 2018, he noticed on one of the walls in an upstairs office, a lovely, but badly faded picture of a stamp of Donegal Town Railway Station. He thought it would make an excellent image for a jigsaw puzzle or the like, but little did he know that his research would cover a lot more than he bargained for.

Niall stated: “I had noticed the artwork and immediately thought that it would be interesting to track down the original, as it was an important piece of art in its own right, recording local history which might also prove invaluable in our future work. Initially, I contacted An Post, but as the stamp was produced over 25 years ago, they didn’t have any details about it or the artist. A few months later, unperturbed, I started again online research and discovered finally the name of the artist, a Charles Rycraft. I couldn’t get information about him online; he didn’t have a website or Facebook Page and there was no reference about him in any online articles. Finally, I thought about trying to obtain contact details through Stampa, The Irish National Stamp Exhibition, and 20 minutes after dropping them an email to them, I received an email from Charles himself!

Charles was delighted that we were interested in is stamps, and explained the background of the stamps, as well as providing much of the artwork for it, including early sketches of stamps that were never produced. The material given by Charles to us is quite astonishing and gives us a unique perspective on the artistic process of producing what is in essence, an outstanding piece of art. A series of four stamps had been commissioned by An Post, and Charle’s drawings show the various locations and illustrations considered including Owencarrow Viaduct in Donegal. The viaduct illustration was not used and instead Donegal Town Railway Station was eventually chosen as one of the illustrations for the stamps. However, we have ended up with a unique set of illustrations, many of which have never been seen before in public. Charles and An Post subsequently have also given permission for our Donegal Railway Heritage Museum to use them, which is great, as they understand our passion for all things Donegal, and how we might use them in the future to benefit the museum.

Charles Rycraft, the artist stated: “For this commission, I worked closely with John Kennedy of the Steam Preservation Society who was also a professional photographer and probably had the biggest photographic collection of historical locomotives and pictorials. There was nothing he didn’t know about Irish Railways. I had previously worked with him on the Trams stamps and the 150 years of Irish Railways stamps. For this work, he presented me with photos, and I chose which views I needed for reference. For the Donegal Town stamp, I used a photograph of Donegal Town Station to produce the actual stamp illustration. I designed the layout/composition, making a line drawing, and showed it to John Kennedy who would check it for accuracy. All design features, mechanical details colour etc. were added, and then I made three copies of the actual size line drawing. The next stage was to mask the line drawing copy, cut stencils and spray/paint the colour which was a transparent dye/ink this allowed the detail line work to show through. John Kennedy then checked the original colour artwork before it was finally submitted to the Stamp Design Advisory Committee for approval.

The Donegal locomotives are very colourful and I was happy with the way the Donegal stamp turned out. We had a launch down in Tralee and travelled on a steam train in March of 1995. I am delighted that this artwork, produced over 25 years ago, can now be used by Donegal Railway Heritage Museum, and wish them all the best in their work in keeping the stories of the Donegal railways alive.”

Over the next few weeks, Donegal Railway Heritage Museum will be posting more illustrations from the original artwork, and it is hoped that sometime in the future, some of it can be reproduced in a larger format for sale, to raise much-needed funding for the museum and their work in celebrating this unique part of Donegal’s history. In the meantime, as the Museum is currently closed to the public, people are asked, if they wished to support the museum during these financially challenging times, they can do so either by making a donation, purchasing a publication or become a Member through its website at www.donegalrailway.com . Any assistance at this time would be greatly appreciated. 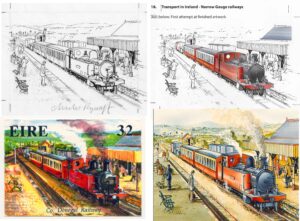 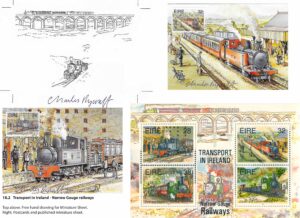 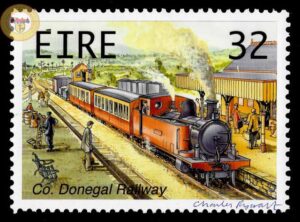 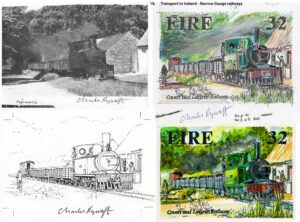 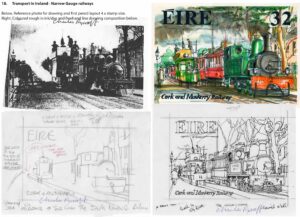 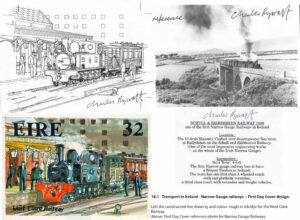 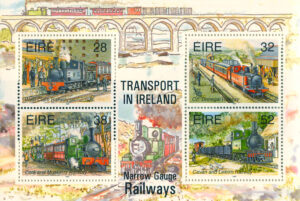