History was made last weekend when the historic Donegal Steam Engine Drumboe, returned to Donegal Town. Early on Saturday morning, Drumboe was carefully lifted out of her home for the last few years at the Railway Preservation Society of Ireland, Whitehead, and placed on a low-loader for its return home. The engine was then taken on a journey up the Glenshane Pass, onto Derry, Strabane, Stranorlar and finally to Donegal Town.

Niall McCaughan, Manager at the Donegal Railway Heritage Museum stated: “Last weekend was a milestone for us and the County, as the first original Donegal steam engine returned to the County in many decades. What made the event even more historical was the fact that this was the very last engine to operate a passenger service in the county, on the 31st December 1959, leaving Donegal Town Station for Strabane.

The homecoming event on Saturday became one of the biggest and most engaging events in the County in recent times. We had given information about the route as well as a live feed of the journey on social media, but we could not have expected the huge numbers that turned out in force along the way to cheer Drumboe home. People were on bridges above motorways, along roads, and anywhere there was a gap in the ditch! Photographers, amateur and professional were spotted not only in every town and village we passed through, but many people were standing in groups outside their houses, particularly through County Donegal. When we reached Strabane, we were met at the famous Tinny’s statues (and former Strabane Station site) by hundreds of people and several national TV camera crews. The convoy then slowly set off through various towns and villages; at Stranorlar again we have to stop for a few moments beside the site of the former Railway Station.

Approaching the Gap, several drones were spotted in the Gap, taking the iconic shot of the engine passing through, and then at a pit stop at Biddy O’Barnes, we were met by large crowds who applauded Drumboe’s arrival, and cheered when her whistle blew loudly across the valley. Many older people were in tears telling me that they never thought that they would live to see a big Donegal red and black steam engine back in the County. The Garda gave Drumboe a final escort on the final leg of her journey into Donegal Town, where the local taxis’ had kindly given up their taxi rink so that she could park at the Diamond. The large emotional crowd assembled gave the famous engine a final applause as she parked in front of the Abbey Hotel. The staff at our museum had also set up a popup museum around the Diamond which received a lot of interest. Many older people again were saying that they never expected to see a Donegal engine back in the town. Kids were awed by the size of the big engine, which is something that they and many adults had only ever seen in picture books and on television. In the darkness of the evening, the engine eventually made the final short journey to the station which she once left on her final passenger journey, 62 years ago! Many people came down to the museum to catch a final glimpse on the historic day.

Early the next day, after the ESB had dropped the electricity cables, CIE had rerouted the buses and 2 massive cranes put in place by Quinns, Edwin Kirk slowly moved Drumboe into place for the final lift. The turnout again by members of the public was unbelievable, all armed with mobile phones or cameras to record the landmark event. After much double-checking of harnesses, safety, etc., Drumboe was slowly swung into position on the newly built presentation platform. As soon as the engine was secured, various other Donegal railway wagons were also lifted and repositioned in the platform.

I have to say that I was really surprised by how emotional people were about Drumboe returning; the entire project seemed to be taken to the hearts of the people in the County. We also had people watching lived proceedings from across Europe, America, Australia, Thailand and many other locations. Goodwill messages flooded our social media and through email.

Over the next few weeks, contractors will be moving onto site to install the canopy, new feature lighting, new safety barriers, and general landscaping. We also have new interpretative signage being installed as well as audio presentation signage which will place recordings of people taking about the Donegal railways, kindly funded by the Heritage Council. When this work is complete we will have the official opening at the end of this year or start of next.

This weekend’s even would have not happened without the support of many groups including RPSI, who restored the engine, Edwin Kirk who transported Drumboe, the Garda who provided an escort and managed the traffic on the day, for Donegal Council for giving us permission for using The Diamond, the ESB team for looking after the electrics, Railway Lodge B&B for permission to use their parking area to accommodate one of the cranes, Tony Monaghan (our official photographer on the day)Quinn’s Cranes, CIE for allowing us to close the access to the depot, Donegal Bay Rowing Club, Roadstone Ballintra, McCaffrey Quarries, and many others. Our staff also gave 110% on the day.

In relation to the restoration of Drumboe herself, it was thanks to donations from across the island of Ireland and further afield, including Graham Forbes (grandson of CDR Manager Henry Forbes), The North West of Ireland Railway Society and many others, it was Donegal Local Development CLG who came in with the main part of the €100k+ project with the LEADER grant from Donegal County Council. McMullin Associates (Architects), Glebe Builders, DSM Consulting Engineers, JC Engineering as well as Project Manager Mark McDaid, brought the project together. We are still fundraising to make up a small shortfall in funding so if people want to contribute they can kindly do so through http://donegalrailway.com/donate   ”

For more information about Drumboe or the museum in general, contact Niall at manager@donegalrailway.com 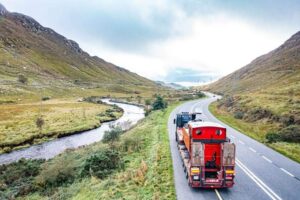 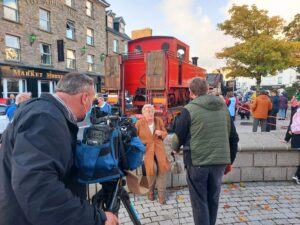 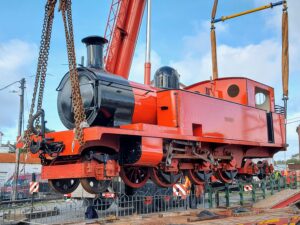 Your ticket for: The Donegal Steam Engine returns Home!