Every year Donegal Railway Heritage Museum produces a new limited edition Donegal Railway badge. We are delighted that this year we have just launched our new badge, which this year is the iconic Railcar No 1. This follows on from our Donegal steam engine, Drumboe badge from last year, which is still available.

County Donegal Railway’s Railcar No 1was the first railway vehicle in Ireland fitted with a combustion engine, and in fact, one of the first in the world! It was built in 1906 by Birmingham firm Alldays & Onions and was built as an open top railway inspection vehicle, only a few years after petrol driven road cars were invented! In 1920, Donegal Railway gave it a covered body. During the general strike of 1926, coal was in short supply, resulting in the Glenties branch only kept running because it used this petrol driven railcar. It was cheap to run and because of its popularity, it encouraged the CDR and then others to introduce petrol and diesel railcars for passenger service, leading to a new era of travel across Ireland. Donegal led the way as always!

This striking eye-catching silver badge is 33mm long showing a detailed side profile of Railcar No 1 in its famous bright red, cream and black colours. The badge also has a butterfly clutch at the back, to ensure it doesn’t move once fitted to a garment.  As we learnt from previous year’s badges, as it is a limited edition and exclusive to us, demand is again expected to be strong!

Finally, as you may be aware, Donegal Railway Heritage Museum have announced that the actual Donegal steam engine “Drumboe” will be returning home in 2021, and proceeds from this badge go, not only towards the running of the museum itself which has been challenging because of Covid lockdowns, but also to meet the small shortfall in this exciting Drumboe project.

(Note: This badge is free, whilst stocks last, to renewing Members from July 2021) 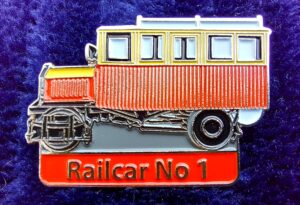 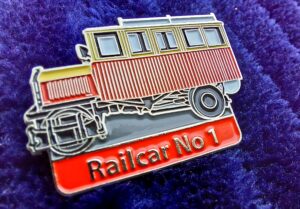 Your ticket for the: NEW – Donegal Railcar No 1 Badge