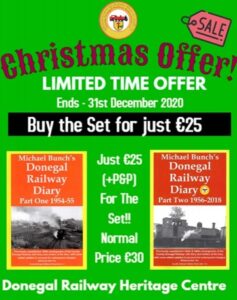 “Part 1” showcases previously unpublished 1950’s photographs of the County Donegal Railway with diary text written at the time. “Part 2” contains significant material with previously unpublished photographs showing trains in operation until its closure in 1959, but also a record of the sad decline of the railway since. Michael as a railway enthusiast had the fortune to be based in Derry in the 1950’s and during this time had a chance to visit and photograph the narrow gauge County Donegal lines as well as keeping an associated diary describing his visits. Photographs of railway stock also include locations in Stranorlar, Killybegs, Raphoe, Letterkenny, Lifford, Ballyshannon, Letterkenny, Castlefinn, Glenties, Strabane and Derry

(10% Discount for Members (If you are a Member contact manager@donegalrailway.com to receive your discount)